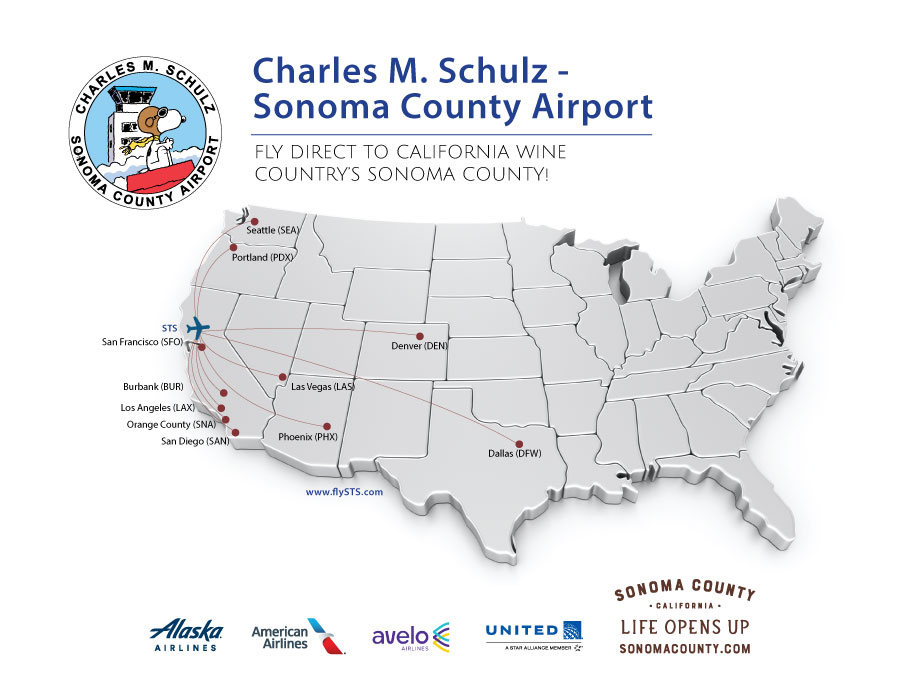 And best of all, when you buy wine in Sonoma County and fly out of STS on Alaska Airlines, your wine flies back home free under the airline's mileage plan.

The Sky Lounge Steakhouse & Sushi Bar features a fresh, organic menu daily for breakfast, lunch, and dinner, including a full bar, a daily sushi menu, and a sun-filled patio where you can watch the planes take off and land. Enjoy a good meal while you prepare for the next step of your journey.

Things to Do around Sonoma County Airport

Not far from STS you'll find the Pacific Coast Air Museum, where you can learn about Sonoma County's aviation heritage while exploring more than 35 historic aircraft. For family fun, check out the Charles M. Schulz Museum, Snoopy's Home Ice, and the Children's Museum of Sonoma County, all located with a few blocks of each other in Santa Rosa.

And of course, this is Wine Country, so tasting the fruit of the grape at one of Sonoma County's more than 425 wineries is a definite possibility.  If your tastes include other handcrafted beverages, follow the Sonoma County Craft Beverage Map.

There are many, many options for things to do in Sonoma County. Flying into STS means you'll be able to start relaxing and enjoying everything Sonoma Wine Country has to offer just that much sooner, without a long drive from a busy airport.

The down-home feeling starts as you enter the terminal and spot happy images of the Peanuts gang that was the brainchild of the airport's namesake, the late (and beloved) cartoonist Charles M. Schulz. Where else will you find an information center decorated like Lucy's psychiatric booth or see wall murals of Snoopy flying his Sopwith Camel (doghouse)? Don't miss fun statues of Charlie, Lucy, and the others, both in the airport and throughout the surrounding community. Just outside the airport's front doors, bronze statues of Charlie Brown and Linus lean on a stone wall, watching travelers coming and going.

Get a Free Visitors Guide and Wineries Map