10 Fun Things To Do on the Northern Sonoma Coast

It's only about 35 miles along the Sonoma Coast from Jenner, at the mouth of the Russian River, north to Gualala Point Regional Park.

But what captivating miles they are. Filled with craggy knife-edge cliffs, isolated sandy coves, and endless vistas, the miles add up to a haunting beauty that will remain in your memory forever.

You'll probably want to stop every once in a while, if just to soak in the view. But there are plenty of great things to do along the way, too.

Here are 10 fun things to do on your trip along that unforgettable 35-mile strip of Sonoma Coast:

Mellow Out at Goat Rock Beach

Gulls, sandpipers and other seabirds peck at the wave line for tasty morsels, beachcombers search for washed-up treasure, and the occasional fisherperson casts a line in hopes of a tasty smelt or rockfish dinner.

This beach offers endless opportunities for exploration and contemplation in its one-mile length — and it's beautiful, to boot. The Kortum Trail on the bluffs above the beach provides a great, gorgeous hike — particularly in summer, when the surrounding seagrass has turned golden and is dotted with pink pennyroyal, golden California poppy, and stark red paintbrush. Learn more about the seals and other wildlife at at Goat Rock Beach, which is part of the 17-mile-long Sonoma Coast State Park.

From 1812 to 1841, Fort Ross — situated on a bluff high above the Pacific Ocean — was the hub of the southernmost Russian settlements along the west coast of North America (a commercial hunting/trading operation charted by the tsarist government).

Today, reconstructed buildings at Fort Ross State Historic Park recall the once-thriving colony, including the stockade, a Russian chapel, a barracks, two blockhouses, and a windmill. The only surviving original structure is Rotchev House, renovated in 1836 for the last manager of Fort Ross, Alexander Rotchev.

The park museum offers details about the three main eras of Fort Ross — Kashaya Indian, Russian, and Spanish rancho. Fort Ross is a California Historical Landmark, a National Historic Landmark, and on the National Register of Historic Places.

While the weather on the nearby coast can be foggy, cold, and windy, the AVA's vineyards are planted between from 900 to 1,800 feet in elevation, where temperatures are warmer and periods of sunlight longer.

This AVA contains five wineries. The outdoor tasting deck at Fort Ross Vineyard & Tasting Room is open on a limited basis (reservations required) and offers jaw-dropping views of the coast. Hirsch Winery & Vineyards and Flowers Vineyards & Winery also offer al fresco pours of their wines (reservations required) at their tasting rooms in Healdsburg. The two other Fort Ross-Seaview vineyards —Peay Vineyards and Wild Hog Vineyard — will be happy to sell you a bottle online.

Get Close to the Ultimate Outdoor Sculpture

Perched on an isolated cliff from which it commands spectacular views, the Timber Cove Resort is adorned with a sculpture to match: Benjamino Bufano's "Peace Obelisk."

The 93-foot sculpture so dominates the cliff that it can be seen from far down the highway. Bufano started working on the obelisk in May 1962, a few months before the Cuban missile crisis. The reality of Soviet and American ballistic missiles poised for global war doubtless influenced the look of the sculpture (which resembles a huge missile and is made of concrete, mosaic tile, redwood and lead).

You don't have to be a guest of Timber Cove Resort to visit Bufano's work; park in the gravel lot north of the inn and follow the short path leading to the obelisk.

About four miles north of Fort Ross, beautiful 6,000-acre Salt Point State Park has much to offer, including one of California's first underwater parks, dramatic up-close views of crashing surf, a pygmy forest, and a lively visitor's center with many activities.

There's some fascinating Tafoni sandstone at Salt Point — sandstone riddled with honeycomb-type erosion that produces ribs, ridges, holes and other patterns. The park has more than 20 miles of hiking and equestrian trails; surf fishing is extremely good; and the rocky waters are popular with abalone divers.

It's only 317 acres, but Kruse Rhododendron State Natural Reserve, a few miles south of Gualala, offers one of the prettiest walks you'll ever find, especially during mid-April through mid-June.

That's the best time to glory in the reserve's spectacular rhododendron blooms — vibrant pink flowers that seem to glow against the surrounding green forest of second-growth redwoods, Douglas fir and tanbark oak.

Five miles of hiking trails weave through the Reserve, the spring streams are running, and you'll also see lots of ferns and coast-loving wildflowers.

Use one of six public access trails in The Sea Ranch, a private community north of Fort Ross, to enjoy panoramic views of sea, sky, and rocky ocean outcrops.

The six trails include Black Point, Bluff Top, Pebble Beach, Shell Beach, Stengel Beach, and Walk On Beach. Learn more about Trails along the Pacific Coast in The Sea Ranch.

This stunning architectural gem — a non-denominational chapel topped by a winged roof that seems set to take flight — will amaze you inside and out.

The exterior of The Sea Ranch Chapel consists of redwood siding that's been dried and molded in place to create a shell. Local stone is used on the exterior's lower walls, on interior walls, and in the courtyard. The copper-accented roof is made of cedar shingles that conform to the winged shape; at the top, a bronze spire seems to point heavenward.

With its vast expanse of white sandy beach and dunes, Gualala Point Regional Park offers the opportunity to stroll beside the Gualala River as it travels seaward.

As you walk, you can construct driftwood castles, run up and down sand dunes, hunt for sea glass, collect shells, try your hand at fishing (depending on the season), enjoy the views, or just sit and daydream.

The region's coastal bluffs are ideal whale-watching spots, especially during the two yearly gray whale migrations. Between November and January, the whales leave Alaska and head south to give birth in the warm waters of Baja. From February into April, mother whales return north with their new calves.

You might be able to spot the characteristic water spout through a whale's blowhole with the naked eye, but binoculars definitely help. 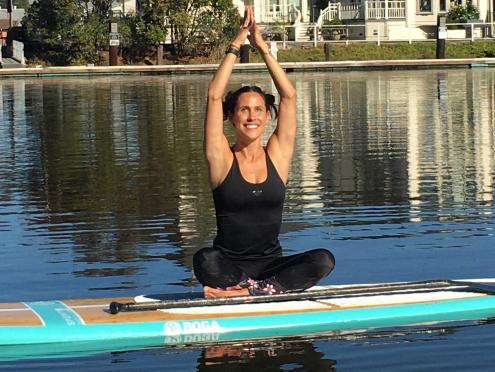 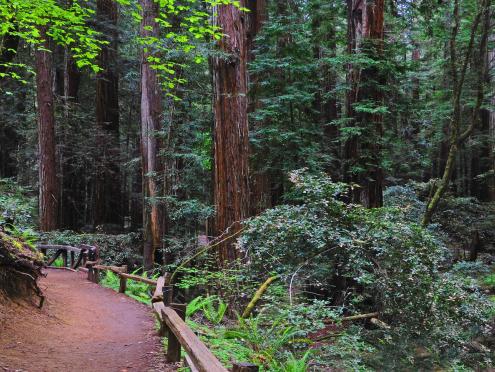 One Sonoma County Hike for Each Month of 2022

One Sonoma County Hike for Each... 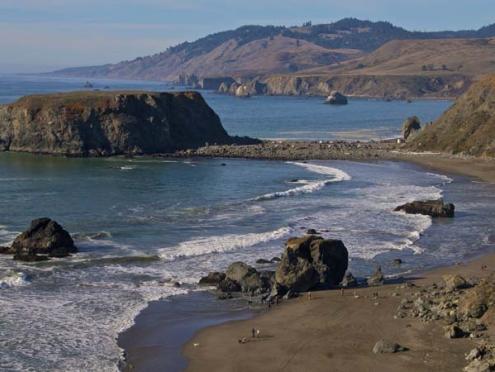 What Sonoma County is Famous For: An A-Z Guide

What Sonoma County is Famous For...