Celebrating the Spirit of Pride in Sonoma County

Sonoma County has long been a popular, welcoming destination for LGBTQ+ travelers from the Bay Area and beyond. Summer is the ideal time to attend exciting annual events, patronize LGBTQ+-owned businesses, and celebrate the spirit of LGBTQ+ pride in Sonoma County — kicking off with Pride Month in June!

Opened in December 2021 by gay Guerneville educator Michael Rex, this independent bookstore functions as a gathering place for bibliophiles, writers, and those who simply love to browse. It's celebrating Pride Month with a June lineup of five-minute readings of original work by local LGBTQ+ writers; interested writers can sign up here. See their calendar of events for other Pride-related readings in June. 14045 Armstrong Woods Road, Guerneville, CA 95446 707-604-7197

Healdsburg’s Cāpo Creek Winery, partially owned by Nadine Roy and her wife Peg, will host a Pride celebration on its estate with wine, food and special drag performances from 1-4 p.m. on June 4. Tickets are $50 and can be purchased here.

North Bay Business Journal will host an awards show honoring LGBTQ+ business leaders in the North Bay from 4-6 p.m. on June 15 at Luther Burbank Center for the Arts in Santa Rosa. Tickets are $75 per person and can be purchased on EventBrite.

The first-ever Windsor Pride Festival will feature live music with local band Wonderbread Five, as well as food and drink, and community resources for kids and adults. Admission is free, but VIP tickets will be available the day of the event.

Local LGBTQ historians Tina Dungan and Shad Reinstein will hold an in-depth presentation on LGBTQ history in the North Bay, followed by questions and discussion. The event is for teens and adults and will take place from 6-7 p.m. on June 29 at the Central Santa Rosa Library (211 E Street, Santa Rosa). Registration is not required, though encouraged. Register for the event here.

This annual three-day celebration of food, wine, and Wine Country for the LGBTQ+ community and allies includes winemaker dinners, winery tours, a drag queen brunch, a wine auction, pool soiree, and the signature Twilight T-Dance at Chateau St. Jean Winery. A portion of the proceeds benefit local nonprofit Face to Face, which focuses on ending HIV in Sonoma County.

Celebrate the 26th anniversary of Lazy Bear Week in the Russian River town of Guerneville as it hosts thousands of revelers for a week of pools, hikes, barbecues, wine tours, shows, dances, feasts, and bonfires. All attendees must be pre-registered, with bear tags available for purchase here. All profits go to local, national, and international charities.

Founded by Matt Grove and Jim Obergefell in downtown Guerneville, Equality Vines partners with organizations dedicated to equality by making per-bottle cash donations directly to organizations. If the name sounds familiar, that's because Jim Obergefell became the lead plaintiff in the landmark Supreme Court case that legalized same-sex marriage across the United States in 2015. With labels like The Decision Pinot Noir and 2019 Rose the Riveter, Equality Vines presents premium wines to benefit equality for all.

Gary Farrell's winemaker for more than a decade, Theresa Heredia is openly gay, and committed to creating Russian River Valley Pinot Noir and Chardonnay that expresses balance, elegance, texture, and a sense of place. The winery benefits from long-term relationships with many of the Russian River Valley’s most celebrated and sought-after vineyards, including Rochioli, Allen, and Hallberg. Perched atop a ridge along winding Westside Road, the winery offers a spectacular view of the sweeping valley below.

Brad Beard is the openly gay founder and winemaker of Mercury Wine in Geyserville. Mercury, which Beard founded in 2009, focuses on Bordeaux grape varieties grown in the Alexander Valley, as well as esoteric white wines and Rioja- and Rhone-style blends. Book in advance for an outdoor tasting on Mercury's flower-filled back patio, and keep an eye out for Freddie Mercury, Beard's beloved black Labrador.

Other LGBTQ+ Businesses in Sonoma County

Founders and married couple Lisa and Carlee Pidge produce stand-up comedy events at wineries across Sonoma County. Their roster of live shows throughout the summer include comic Frances Dilorinzo performing at Deerfield Ranch Winery in Kenwood on June 25.

Life partners and entrepreneurs Ozzy Jimenez and Christian Sullberg own two outposts of their Noble Folk Ice Cream and Pie Bar — one in downtown Santa Rosa, and one in Healdsburg, where Jimenez serves as vice mayor. The Noble Folk storefronts proudly fly the rainbow flag and the transgender pride flag, and display Black Lives Matter posters to signal that these businesses celebrate diversity and inclusion.

Out in the Vineyard

Owned and operated by the local gay community, Out in The Vineyard is an experiential Wine Country tour and event company offering exclusive itineraries (including winery tours and dining experiences) to discriminating gay and lesbian travelers. Out in the Vineyard events — which include the Sonoma Pink Party and Gay Wine Weekend — gather the LGBTQ+ community to socialize and raise funds for many worthy LGBTQ+ causes.

In a strong display of allyship with the LGBTQ+ community, two Sonoma County accommodations have partnered with Sonoma County Pride in 2022 — the sleek Flamingo Resort  and the Marriott-branded Lodge at Sonoma Resort.

LGBTQ+-friendly lodgings that partnered with Pride in 2021 include three Santa Rosa properties: The urban/quirky Astro Motel, the Beaux-Arts Hotel E on Downtown's Courthouse Square, and the elegant Vintners Resort, which features a restaurant, spa, and two pools set among 92 acres of vineyards.

To explore more lodging options for your Pride-ful summer in Sonoma County, be sure to see Sonoma County's Most Gay-Friendly Accommodations.

Happy Pride from — and in — Sonoma County!

Out in the Vineyard Tours 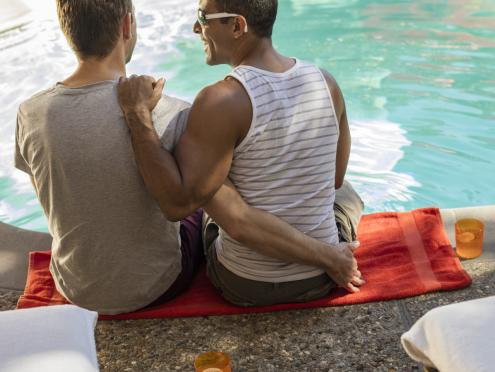 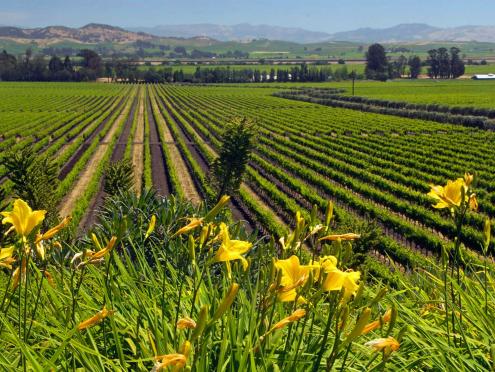 5 Tips for Planning Your Big Gay... 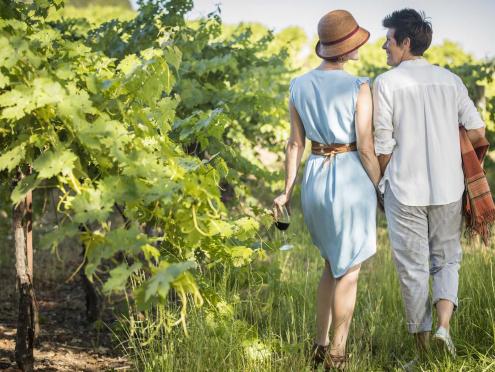 Out in Sonoma … and in the Vineyard!

Out in Sonoma … and in the Vineyard...