One of the best ways to get familiar with Sonoma County is to check out its superb natural wonders. These marvelous twists of nature, all of them in beautiful locations scattered around the county, will take you by surprise and stay in your mind forever.

Located on the coast about four miles north of Fort Ross, the 6,000-acre Salt Point State Park is known for its dramatic beauty. It's a place of steep sea cliffs, surf crashing against rugged rocks, fantastic sunsets, and fascinating Tafoni sandstone sculpture. Riddled with honeycomb-type erosion that produces ribs, ridges, holes, and other patterns, the Tafoni takes on infinite lacy shapes, patterns, and complexity. Delicate-looking but enduring, it's sometimes called stonelace. The park has more than 20 miles of hiking and equestrian trails; surf fishing is extremely good; and the rocky waters are popular with abalone divers.

In the northern reaches of Sonoma's coast lies one of the world's wonderful oddities: a pygmy forest. Acidic soils and other environmental factors deprived the trees here of the nutrients needed to grow normally. When fully mature, the trees are perfect miniature versions of their species, but only a few feet tall. Situated at the highest elevation within Salt Point State Park, the pygmy forest is populated with stands of tiny pine and cypress trees - and even a small-fry version of the usually gigantic redwood tree. You can see this miniature forest by following the park's looping 3.8-mile Pygmy Forest Trail.

A tributary of the Russian River and the county's largest freshwater wetlands complex, the 254-square-mile Laguna de Santa Rosa is a stunningly beautiful mosaic of creeks, open water, perennial marshes, riparian forests, seasonal wetlands, oak woodlands, and grasslands. An essential stopover destination for migrating birds, it's also a permanent home to numerous mammal, fish, bird, and plant species. Hike or bike the 1.8-mile multi-use trail, or try the 2-mile Laguna Wetlands Preserve trail (open to hikers and wheelchairs, but not bikes). Another idea: visit the Laguna Environmental Center for a self-guided tour, or choose among three put-in locations for your kayak.

One of the best-loved beaches in Sonoma County is named for a rock — but not just any rock. There's a magic and mystery to Goat Rock, an immense flat-topped sea stack that's barely attached to the sandy beach by a narrow isthmus. According to marine scientists, it was once a sea level marine terrace that was later uplifted. Goat Rock is said to have derived its name from goat herds that grazed nearby more than a century ago, but nobody really knows. Goat Rock Beach offers endless opportunities for exploration and contemplation in its one-mile length — and it's beautiful, to boot. Located in Jenner, just south of the Russian River's outlet to the sea, the beach provides views of other sea stacks further out, white-capped waves, and sand dunes. Gulls, sandpipers and other seabirds peck at the wave line for tasty morsels, beach combers search for washed-up treasure, and the occasional fisherperson casts a line in hopes of a tasty smelt or rockfish dinner.

It's impossible to visit Sonoma County's Armstrong Redwoods State Natural Reserve and not be impressed by the magnificence of nature. Located in a canyon two miles from Guerneville's Main Street, the Reserve is a living reminder of the immense forests of Sequoia sempervirens that once covered Sonoma County's coast. In the 805-acre park you'll hike trails surrounded by amazing trees that live to be more than a thousand years old (the Reserve's oldest tree, Colonel Armstrong, has lived more than 1400 years), grow to a diameter of 12-16 feet, and can approach nearly 400 feet in height. Walk the self-guided Armstrong Nature Trail to learn about redwood trees via interpretive displays, and be sure to bring a picnic so you can relax and feast beneath the redwoods' canopy.

The thermal waters of Boyes Hot Springs can now be sampled in a luxurious setting at the Fairmont Sonoma Mission Inn & Spa, with thermal mineral waters in two pools and a spa (There is an $89 daily charge for non-hotel guests using the bathhouse, unless they schedule a same-day spa treatment).

The geo-thermal waters of Morton's Warm Springs, once sacred to the local indigenous tribes, are accessible today in three separate pools - and in a beautiful, 20-acre country setting.

One of the World's Richest, Most Diverse Marine Environments

The sanctuary provides significant breeding and feeding grounds - including open ocean, rocky intertidal areas, wetlands, subtidal reefs and coastal beaches - for an abundance of aquatic species, including many that are endangered or threatened.

The amazing diversity of marine life here includes 25 endangered species, 38 species of marine mammals like humpback whales, and one of the planet's largest white shark populations. The sanctuary also shelters cultural resources such as shipwrecks or Native American artifacts; serves as a valuable research resource; and offers opportunities for fishing, wildlife viewing, boating and tourism.

Visitors can enjoy the sanctuary in an endless ways. A stay in Bodega Bay provides opportunities for hiking along sea cliffs or sandy beach, whale watching from shore or an ocean-going boat, sleeping in a beautiful inn with ocean views or camping on the beach at Doran Regional Park, and much more. Or you could spend a few days traveling along the hauntingly beautiful coast, stopping wherever you feel like to take in the views or spend the night.

A Wealth of Sand Dunes

The stunning beach and sand dunes at Gualala Point Regional Park stretch between the Pacific Ocean and the outlet of the Gualala River. An unusual feature of the Gualala River is that it runs parallel to the coast in a south-to-north direction. On the river side of the park you can wade or swim in warm water (in summer), explore cattail marshes, observe osprey nests, and go fishing or kayaking. On the ocean side you can build a driftwood fort, roll down sand dunes, observe and photograph the numerous species of shorebirds, relax with a picnic and a good book, and a lot more. The park offers clifftop trails, a campground nestled beneath redwood trees, and a visitors center with comprehensive displays. Early Spanish explorers named the river based on the local Pomo Indian word, Walali, which means, "Where the waters meet."

Find more fun things to do in Sonoma County. 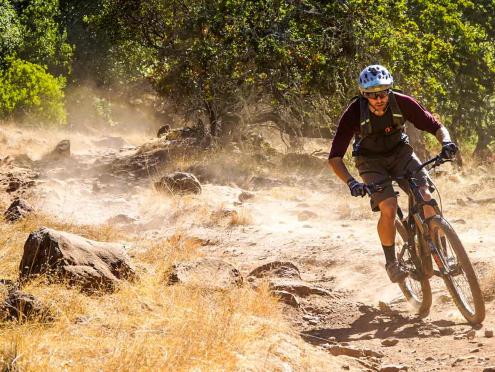 Parks for Mountain Biking and Bikepacking