The History of Pinot Noir

One of the earliest grapes to bud out in the spring, Pinot Noir was nevertheless a late bloomer in Sonoma County wine country. For over a century since California's commercial wine industry was founded here in the 1850s, the noble grape of Burgundy played a minor role. Tantalizing and legendary examples surface here and there in the history, but it wasn't until long after the end of Prohibition that experimentally minded growers and pioneering winemakers teamed up to create a Pinot Noir renaissance.

Today, the cult of Pinot Noir is mainstream, and Sonoma County is an internationally recognized growing region for quality Pinot Noir.

In 2018, Pinot Noir was grown on 13,100 acres in Sonoma County, representing about 20% of the region's vineyard acres. That's just slightly more than Cabernet Sauvignon's real estate, and more than double that of Zinfandel. By a wide margin, Sonoma County is one of the leading producer of Pinot Noir among California counties.

Pinot's fortunes have risen in tandem with the fame of Sonoma County's coolest sub-appellations, particularly the Russian River Valley, the Sonoma Coast, and Carneros. In growing regions once thought to be marginal, the notoriously "difficult" grape found a match made in heaven.

Historically, the grape has been called by many names in France and in neighboring countries, including Pineau de Bourgoyne, Franc Pineau, and Spatburgunder. Pinot Noir, meaning 'black pine cone' because of its dark color and compact, conical shape, has proven to be the most sticky of the bunch.

It is not known whether Pinot Noir was imported into France or developed in situ from the wild vinifera grapes that grew in Europe before Roman settlement, but it's agreed that Pinot is among the oldest of French grapes. Whether it's the similarly shaped grape mentioned by a first century writer, or cropped up in the Middle Ages, it was almost certainly the grape that Philip the Bold, Duke of Burgundy, decreed be planted instead of the 'vile and noxious' Gamay grape.

Burgundy was overshadowed for centuries by Bordeaux, and when the region recovered from two world wars, quality was diluted as yields increased with the introduction of chemical fertilizers and herbicides. In fact, as many observers have noted, it wasn't until the 1970s and 1980s that a renaissance in winemaking and vineyard practices created the modern Burgundy of today - contemporaneously with the rise of Pinot Noir in California.

The wine pioneers of nineteenth century Sonoma County were energetic experimenters, constantly importing cuttings from the famous vineyards of Europe to try them out in sunny California. A San Francisco newspaper reported in 1883 that John H. Drummond was growing Pinot Noir in his vineyard, now part of the Kunde Family Winery property. Pinot was grown at the legendary Fountaingrove Winery from the 1880s through the 1940s. It was even available at the one-time tourist destination, Italian Swiss Colony.

But most of the wine labeled "California Burgundy" was made from Zinfandel and other hearty grapes, and contained no Pinot Noir at all. Pinot had acquired a notorious reputation as a difficult grape and a capricious wine. "God made Cabernet Sauvignon," the great enologist André Tchelistcheff allegedly pronounced, "whereas the devil made Pinot Noir."

It's true that even well-made Pinot Noir, from the best of vineyard sites, can be changeable and vexing in the cellar or in the bottle. But most of the reasons for its former, poor reputation are fairly straightforward: For one, Pinot requires a cooler climate to properly develop its coloring and aromatic compounds than some other grapes. That's why you don't see prize-winning Pinot coming out of California's hot Central Valley.

It also benefits from a long, cool run-up to fermentation — a technique of "cold soaking" that modern winemakers use, which mimics the naturally cold conditions in a traditional Burgundian cellar in the fall. Such conditions could not be guaranteed in California before the advent of stainless steel tanks and cooling systems.

The grape's thin skins are susceptible to disease and rot, a real problem until addressed by modern fungicides. On the other hand, the modern pumping and vatting procedures of scientific, twentieth century winemaking were a real problem for Pinot Noir wine quality - until a new breed of winemakers reintroduced low-tech, traditional techniques.

Pinot Noir was a marginal varietal wine, indeed, when farmers like Joe Rochioli and Burgundy-besotted enthusiasts like Joseph Swan took a chance on Pinot Noir in the 1960s and 1970s. The cult grew through the 1980s and 1990s, and after the turn of the twentieth century, it really took off. (The 2004 movie, Sideways, is popularly credited with helping to raise the wine-drinking public's awareness of Pinot Noir — but poor Miles, if he had only traveled another five hours north, he might have found true Pinot Noir happiness.)

Pinot Noir is rarely blended with other wines, and when it is, winemakers certainly don't mention it like they do with their Cabernet Sauvignon and Merlot blends. Pinot Noir is prized for its eclectic aromatic profile, which may run from fresh strawberry to dried potpourri, wet hay, earth, mushroom, and forest floor, while its flavors may evoke anything from tangy, red berry fruit to cherry cola.

Although Pinot Noir may vary in hue from light strawberry to deep blueberry, color is no indication of quality. It may be tannic, but on an entirely different order than the show-stopping tannins of a Cabernet Sauvignon, and oak barrels add spice but rarely dominate Pinot Noir wines.

The quintessential Sonoma County Pinot Noir region, the Russian River Valley itself contains a number of distinct subregions, although most of them are not officially recognized AVAs: The "Middle Reach" is located adjacent the river itself, but is relatively warmer; the Green Valley of Russian River Valley AVA is cooler; the Sebastopol Hills area lies to the south.

This AVA is shared between Sonoma County and Napa Valley. In the summer, temperatures in the Carneros are influenced more by breezes from the San Pablo Bay than directly from the ocean, lending the region's vineyards a cool, windy, but relatively stable ripening regime. Pinot Noir for sparkling wine is particularly important in the Carneros region.

No discussion of Sonoma County Pinot Noir would be complete without a mention of Hanzell Vineyards, established in 1957 in the hills above the town of Sonoma. 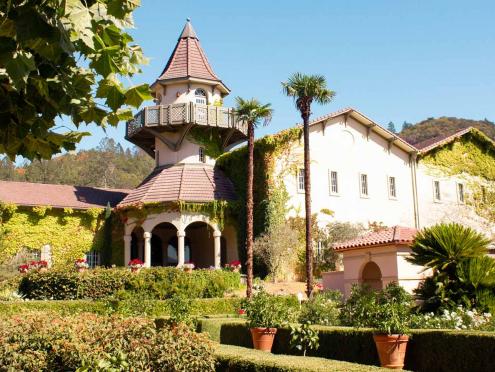 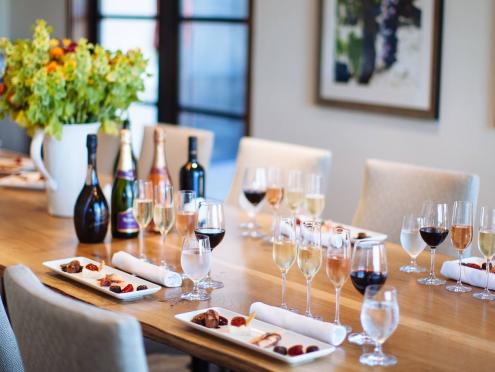 Top Wineries with Wine and Food...