Newly designated in 2018, the Petaluma Gap is among the growing number of appellations to earn American Viticultural Area (AVA) status based more on climate and topography than 'political boundaries' on existing maps. It's also one of the few Sonoma County appellations that cross county lines: Sonoma County shares the southern portion of the Petaluma Gap with neighboring Marin County.

Note that no 'Petaluma Gap' wines that were bottled and labeled prior to 2018 will be found at wineries and retailers, even if the wines originated from the new AVA. It remains to be seen how many wineries will choose the new appellation instead of Sonoma Coast on their labels, as they can choose either one.

The Why of the Gap

The Gap is cool. While it's often wise to bring a sweater to a barbecue in Sonoma County in July, because temperatures drop later in the evening when ocean breezes and fog roll in, the Gap is the part of the county that chills first - maybe even before the briquettes are hot enough for grilling.

The flip side of all that summer fog is that the ocean moderates the region in winter, also. Because temperatures don't fall quite as low as in interior locations, vines may start growing earlier in the season, resulting in a longer but cooler growing season. In wines, this potentially translates to ripe flavors with lower alcohol and higher acidity.

Widely recognized as a cool-climate region for the production of fine Pinot Noir, Chardonnay, and other varietals, the older Sonoma Coast AVA encompasses much of the new Petaluma Gap AVA. However, because Sonoma Coast is so large and sometimes critiqued for its ungainly outlines, advocates for sub-AVAs have sought recognition for their own corner of the Coast.

This new AVA came about thanks to the efforts of the Petaluma Gap Winegrowers Alliance (PGWA), which was founded in 2005 and formally applied for AVA status in 2015.

Pinot is the word in the Gap - Pinot Noir, that is, the thin-skinned Burgundian red that excels in a cool climate claims 75 percent of Petaluma Gap vineyard acreage.

Chardonnay comes in a distant second at 13 percent, but is one to watch, as this white Burgundian grape from cooler growing regions often holds its own when fermented in oak barrels and comes out still shining and bright.

Yet some wines made with Petaluma Gap Pinot Noir and Chardonnay may not even be labeled as either, because they are sparkling wines. The high acids and low sugars are ideal ingredients for California producers of traditionally made, or méthode champenoise, sparkling wine.

Close on the heels of Chardonnay - an unusual ranking in both California and Sonoma County growing regions - is Syrah, claiming 12 percent of the dirt. A lesser-known facet of coastal California vineyard sites famous for their Pinot Noir is that they often have a little Syrah on the side, too. The style is more akin to savory, cool-climate northern Rhône wines than the jammy, warmer climate style of this varietal.

Less than one percent of Petaluma Gap vineyard acreage is planted to other grape varieties.

Petaluma Gap: The Lay of the Land

The appellation's name comes from a gap in the California Coast Range of mountains and hills: an area of low-lying hills and valleys, relative to the topography immediately to the south and north of this corridor, that allows cool wind and fog from the Pacific Ocean easy access to the interior of southern Sonoma County.

All of Sonoma County's wine regions benefit from the influence of these ocean breezes and fog, to one degree or another. The difference with the Petaluma Gap is the lack of a bar to entry: even when the marine layer is relatively shallow, this region gets fog and stronger winds on days that others may not.

The AVA's western boundary is the Pacific Ocean, but despite the fantastic view, very few grapes are grown within sight of it. It's just too cold.

To the south, the Petaluma Gap crosses into Marin County. Here, the coastal hills start to climb again, peaking at 2,572-foot Mount Tamalpais.

On the north end, the outlines of the AVA roughly follow another line of slightly higher hills that contain the marine layer's initial incursion, but stop short of the expanded Russian River Valley boundaries, although the southern Russian River Valley basically shares the same soil and climatic attributes.

The eastern border of the Petaluma Gap is neatly defined by the ridgeline of the 2,463-foot Sonoma Mountain and associated hills.

Although the Petaluma Gap has not been widely recognized as a wine region in recent decades, General Mariano Vallejo planted vines near the Petaluma Adobe in the 1830s, and a winery founded by James G. Fair, of the Fairmont Hotel in San Francisco, was one of the largest in the state in the 1890s. Before Prohibition the region was producing wine from 1,000 acres.

In recent decades, the focus has been on vineyards, not wineries. Fans of some of Sonoma County's most recognized Pinot Noir producers, like Kosta Browne, have enjoyed Petaluma Gap wines for years.

Outside of the AVA, notable producers include Three Sticks, Sojourn, Ramey, Rodney Strong, DeLoach Vineyards, Cline Family Cellars, and others. Inside the AVA boundaries, Keller Estate is a long-established and architecturally interesting winery.

Wine tasting in the Petaluma Gap is about the joy of discovery - few and far between, vineyards and wineries are tucked in between rolling hills grazed by cows, goats, and sheep.

Start at Barber Cellars, located in the remodeled Hotel Petaluma and offering cheese from the region's artisan creameries. North of the AVA, just off the 101 freeway in Santa Rosa, Fogline Vineyards offers Petaluma Gap-grown wines.

In the Petaluma Mill, Adobe Road Winery pours their Cabernet Sauvignon and other award-winning wines. Founded by a performance racing team leader and named for the main road to the adobe where General Mariano Guadalupe Vallejo first planted wine grapes in the 1830s.

The PGWA provides a complete list of Petaluma Gap wineries with tasting rooms.

Restaurants and Lodging near Petaluma Gap

Although not historically known as a 'wine country' destination, vintage downtown Petaluma has long been home to some of Sonoma County's finest wine country cuisine.

Now billed as a farm-to-table restaurant, Petaluma's Central Market was doing that long before the phrase became popular.

Restored to recall the grand old days of hotel travel, Hotel Petaluma is the region's newest, and perhaps most stylish option in lodging.

The Sheraton Sonoma Wine Country perches on the banks of the Petaluma River, is accessible by boat, and is next to excellent walking and birding trails in the 165-acre Shollenberger Park.

Go eclectic at the Metro Hotel & Café, a French-inspired hotel and café with rooms, cottages, and Airstream trailers.

For more options, check our listings of Petaluma hotels. 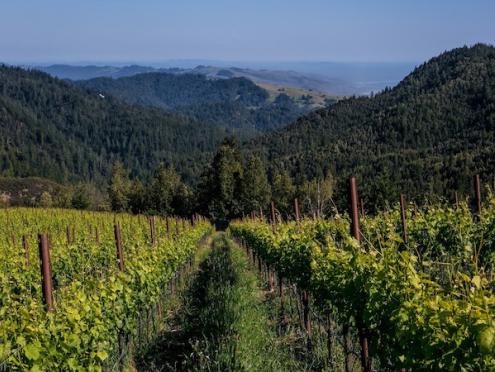